Our sightseeing day is over and work begins!
This three day conference brought with it many stories, songs and laughter.
Thursday and Friday focused on pastors wives. Although we were the guest speakers, we learned so much from them. 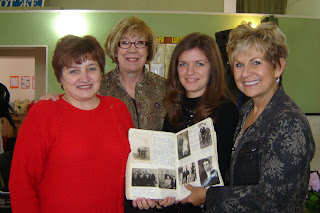 Here is Luba and her daughter Aloina, holding a diary of Luba’s father. In the 40’s and just a teenager, he was taken to Siberia and imprisoned because of his faith in Jesus Christ. He was held there for ten years, three of them hard labour and torture. While there living in the settlement, he met Luba’s mom and the legacy of faith passed down.
Below:
Yuliya (Julie), our translator, barely 80 pounds, has an English/Psychology masters at 22 and works in a travel agency to make enough money to survive. 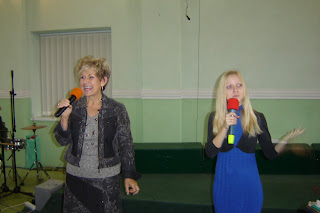 Oh how these women love to dress. Just look at the footwear! Marg and I are thinking of some additions to our shoe rack. 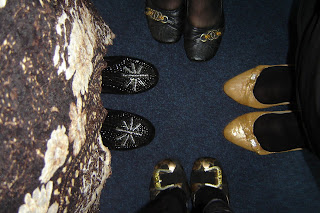 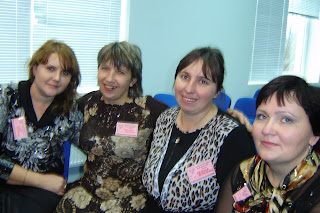 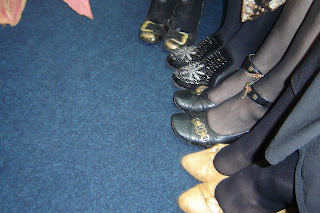 I’ve learned much about Marg and her family heritage. Did you know that her grandfather also
spent three years in prison because this formerly atheistic society hated Christians?
One official in particular made sure that her grandpa stayed in prison and made life very difficult for Karp Hrycauk. God’s design. Also in prison were several German Bible professors. Imagine this. Grandfather Karp learned God’s word while in prison.
Later her grandparents immigrated to Canada and settled in Alberta. With Bible close at hand,
he began house churches to new German, Polish and Ukrainian settlers.
Strangely enough, the man responsible for Karp’s prison time also moved to Canada and to the same Alberta area. After hearing from some townsfolk that there was another Ukrainian holding house church meetings, he determined to attend and make fun of Karp again.
People arrived on horses and sleighs on that cold winter night and the group waited for their preacher.
When Karp walked in to the assembled group, the man stood and pointed at Karp, saying,”You’re the one, you’re the one. I believe in your saviour.”
Forgiveness, redemption and God’s grace took place and the two men and their families became very close friends. You’ll see Marg in the picture above with Luba, Aloonia.
We are amazed at the hunger and thirst for God’s word and the willingness to participate in memorizing. When I asked for volunteers who desired a deeper challenge in memorizing, all seventy women eagerly walked up to the front. What an adventure and such incredible results in just two days together. Psalm 8 in it’s entirety with signing, singing and reciting. Watch for the final presentation on Youtube coming soon.
Don’t forget to come back for the next heart-warming, overwhelming story of our great God!
Download Nulled WordPress Themes
Download Nulled WordPress Themes
Premium WordPress Themes Download
Premium WordPress Themes Download
free download udemy course
download huawei firmware
Premium WordPress Themes Download
download udemy paid course for free
Posted in Uncategorized