Skip to content
Here we are on Sunday morning, Marg up at 6:00 am to grab the bathroom first before the added house guests arise. Terry and heather Burns are amazing Canadians who have given four years to teaching and working with missionaries here in Kiev. Their home is an open door, even though there are bolts and locks every fifteen feet.
Three more men arrive to share this apartment space so hence the run for the shower!
Our translator, Julie, arrived at 8:30 and off we went in another van, with her, Olga and Peter, the driver. The two and a half hour drive took us to an eleven hundred year old city, Pereyaslav-Khnelnytsky. (Say that in a hurry.)
In 1990, this group below went to the director of a pagan festival and asked permission to sing! “Yes, you can sing after the men jump over the fire and people are going home.”
This singing ensemble grabbed the opportunity and began to sing as many festival-goers left the gathering. The more they sang, the larger the group that turned around, returned and stood to hear the gospel through the songs. 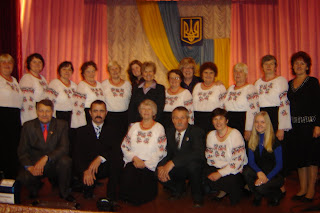 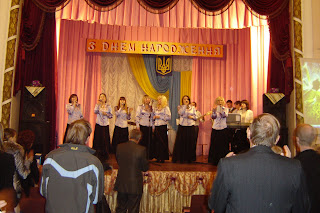 The worship team led in variety of quality music, from classical, contemporary to traditional Ukrainian ensembles. 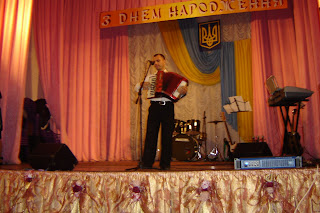 picture of congregation in the theatre of the building. 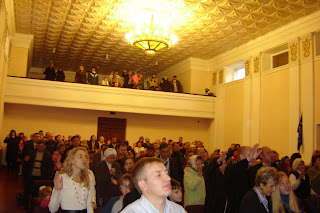 This day marked a twenty-year anniversary, this church birthed just one year before the collapse of Communism.
For seventy years this nation was forced to write and repeat, “There is NO God!” How interesting that today and each Sunday, this body of believers meets here, a former Soviet building.
Many years earlier, Pastor Urgys wife participated in the required writing of the atheistic regime, BUT God intervened and today, what a celebration!
As the first and only Christians in the beginning, Pastor Urgy and his wife were the laughingstock of the town. They prayed and believed for just a convert or two.
Today, over two hundred and fifty believers crowded into this theatre that once housed ‘God-haters.’
Four new churches have been launched from this mother church.
With tears rolling down her cheeks, she smiled, “Look what God has done. I can hardly believe it.”
Drama and stories from their history kept all of us captivated by God’s greatness and faithfulness.
Marg topped off the morning with the telling of her wonderful Ukrainian legacy.
The three hour service seemed like an hour, for the ‘joy of the Lord filled the place.”
Is it possible that a Greater joy is birthed out of deep pain? We believe we saw the results of that thought today.
Stop by again for there is more!
Download Best WordPress Themes Free Download
Download WordPress Themes
Download WordPress Themes Free
Download Best WordPress Themes Free Download
download udemy paid course for free
download intex firmware
Download WordPress Themes Free
udemy course download free
Posted in Uncategorized