I’m so glad that you stopped by. I want to encourage you to pour biblical truths into your life and then watch for the new, the fresh, the ‘more than you can imagine’ that takes place when we believe what God says and apply those truths to our life.

I haven’t always felt so strongly about God’s Word.

My mother used to tell me, “The Bible has an answer to everything.” I believed her when I was a little girl, doubted her as a teenager, and years later personally discovered the truth of her comment. God’s Word reveals wisdom about all things that really matter—who I am, why I am here, how I can live through the joys and sorrows that life brings and then live forever in a better place.

Could my mother be right? It took an emotional crisis for me to discover the reality of her words.

“Oh God, I’ll do anything you want me to do if you just get me out of this depression.” Lying on my face, I pounded the floor and cried, trying to make sense of my life. 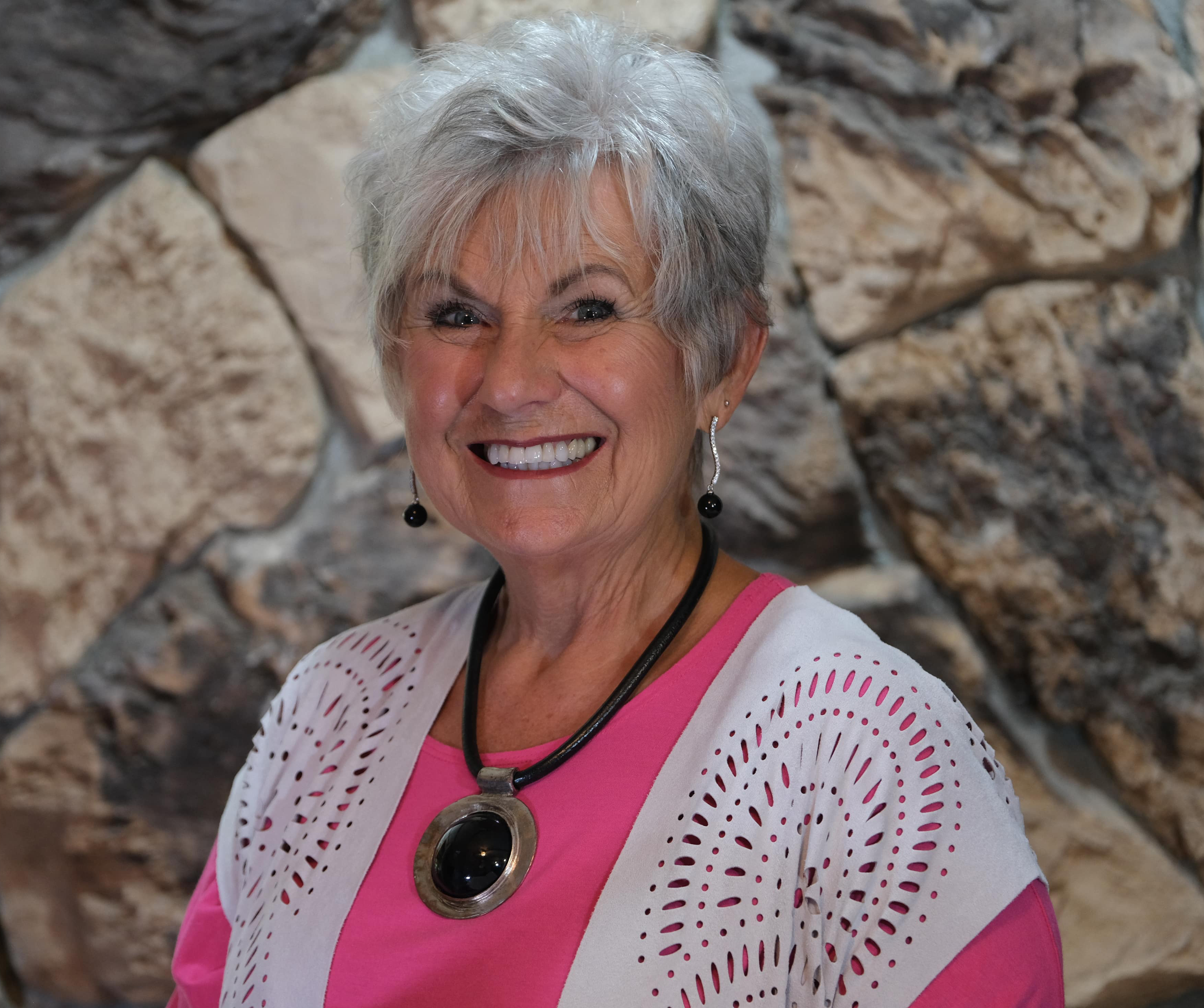 I was desperate. I felt like a worthless failure and believed that God could never use me. Little did I know that, in the midst of my hopelessness, God was calling me to get to know Him, to discover His true character.

Every Sunday, my husband Bob and I attended church—it was what we had always done, both of us living in parsonages as children as our fathers were ministers.
I regularly carried my Bible and opened it for the scripture of the day but rarely opened it between Sundays.

Is God enough? I wasn’t sure at that point in my life. I felt condemned because of my youthful sins.

Is God faithful? I had witnessed the truth of His faithfulness to others but never personally experienced it.

Although I didn’t feel any release immediately after praying my desperate prayer, I made a decision that day that I would live my life differently. I would explore God’s Word and let the Lord be in control. It has been a long and slow journey, but now, decades later, I continue to discover new and fresh truths, many of which I include in the WOW series Bible Studies. 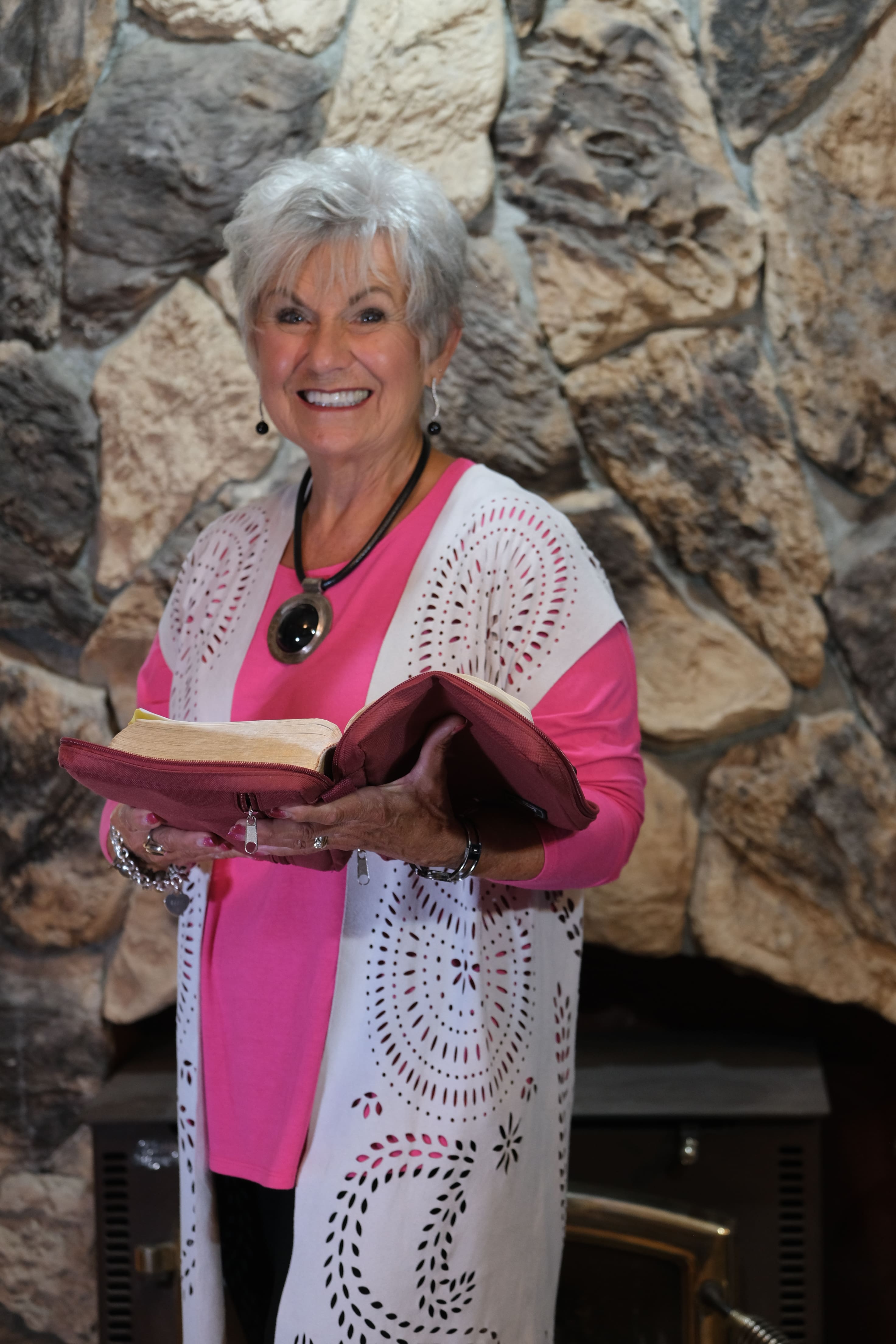 I began speaking for Christian Women’s Clubs in the late seventies and new opportunities opened up for day events, weekend retreats, and other ministry happenings.

In 1999, I resigned from my job as manager of a cosmetic company to give myself fully to pursuing God’s call on my life. My goal was to speak internationally about the transformation that God had brought into my life through His Word.

At that time, Zig Ziglar was one of my favourite motivational speakers. He declared that if you had a specific goal in mind, you should think of ways to help others to achieve the same goal, and you’d be surprised how much easier it was to accomplish your own personal goal.

I didn’t know what else to do so Seasoned with Salt birthed that year. Together with Bob and my sister, Alma Petersen, we led seminars to help women and women share their personal testimonies, create a Bible study from a scripture passage, and all things related to podium excellence.

“ Let your conversation be always full of grace, seasoned with salt, so that you may know how to answer everyone.” Colossians 4:6 (NIV)

In 2009, ten years later, Bob and I left for India, Thailand, and Nepal for a month of teaching and speaking. God, in His time, began to unfold great ministry opportunities. Words To Inspire—Lifelong Empowerment From God’s Word grew out of Seasoned With Salt and became our new ministry name in 2014.

For many years I taught the inductive Bible Study method, the classes filled with young mothers eager to delve into God’s Word. Over time, the number of participants signing up dwindled. Compelled to bring Biblical truths in a simple way for the time-constrained woman, I began The WOW Series.

About The WOW series

Four years later, in 2005, I spoke at a weekend retreat in Western Canada. The four points of the one message became the titles of each of the four messages I delivered.

Two weeks after this event, I received a package in the mail with the four messages recorded on CDs. The beginning of resources I could use to spread the message came in this surprising way.

In preparation for our 2009 Asia trip, I put together an eight-week study, two lessons each on the same four topics. You might think that by now I would be getting weary of the same content, but I was learning that my central message was based on these themes.

In an old farmhouse with my friend, the Rev. Donna Mann, we collated the twenty copies of the lessons on her church copy machine, printed at our local printer.

As the first one came off the press, with its plastic coil binding, Donna handed it to me with the words, “This is going further than you have dreamed.”

I left those copies in the three countries where we spoke, and upon my return, I taught the eight-week course at my church.

What a wonderful experience!

The only complaint at the end of that first pilot was that there were too many topics for one study book. In 2012, I began to develop each more fully, and now there is a four-lesson study book for each topic. 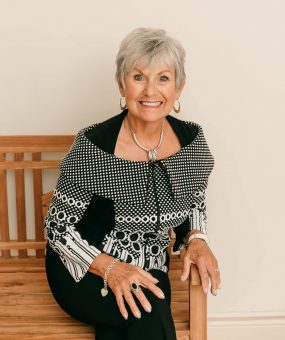 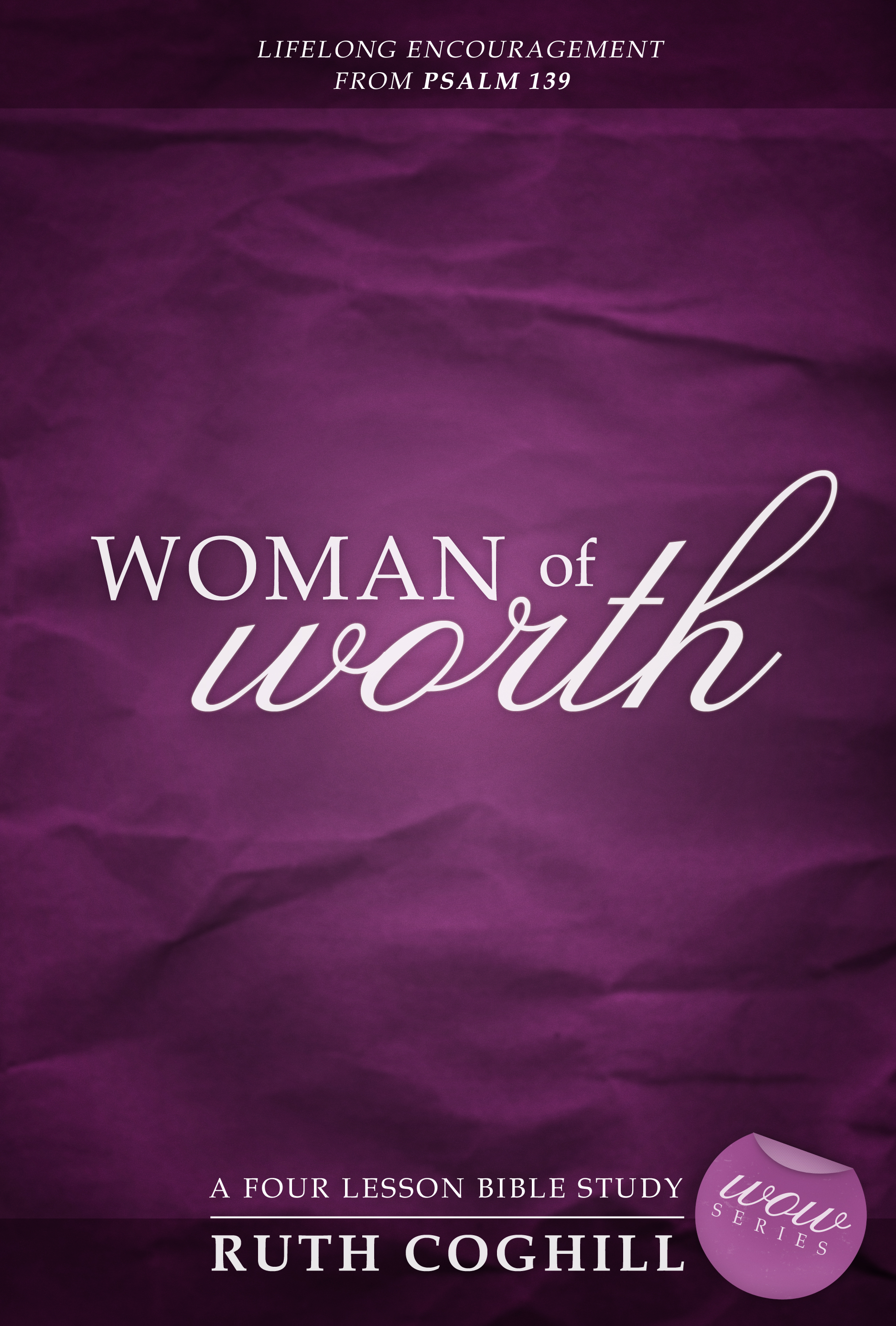 Woman of Worth—Lifelong Encouragement From Psalm 139

My crisis with depression became the reason for starting here. I memorized Psalm 139 and repeated over and over its nuggets of truth—God knows me, God is with me, God created me, and God defends me.

The power of these truths overwhelmed me at times. I knew firsthand that what I believed about myself had tremendous impact on how I lived.

So the expanded Woman of Worth began to take shape as I shared the joys and sorrows of my life. 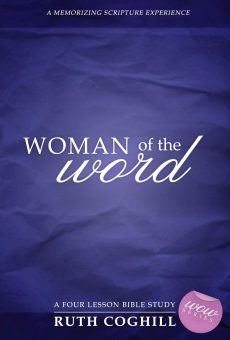 Woman of the Word- A Memorizing Scripture Experience

The Bible Study season approached its end. Three girls walked up to me at the end of class. “Would you teach us to memorize scripture?”

Taken aback, I responded, “Just do it.” I spent the next week praying about ways I might help these ‘thirsty for scripture hidden in their heart’ participants. I agreed to put together some ideas that we could explore during the remainder of the session. Six weeks later, I had the notes for the second book in the series, Woman of the Word.

*** I got excited as I walked in the morning, reciting scripture. Often I didn’t really feel like this daily exercise, but by the time I returned home, I had new energy. Sometimes the energy was physical but, more importantly, the energy impacted my mind, providing me with fresh perspective for my day. 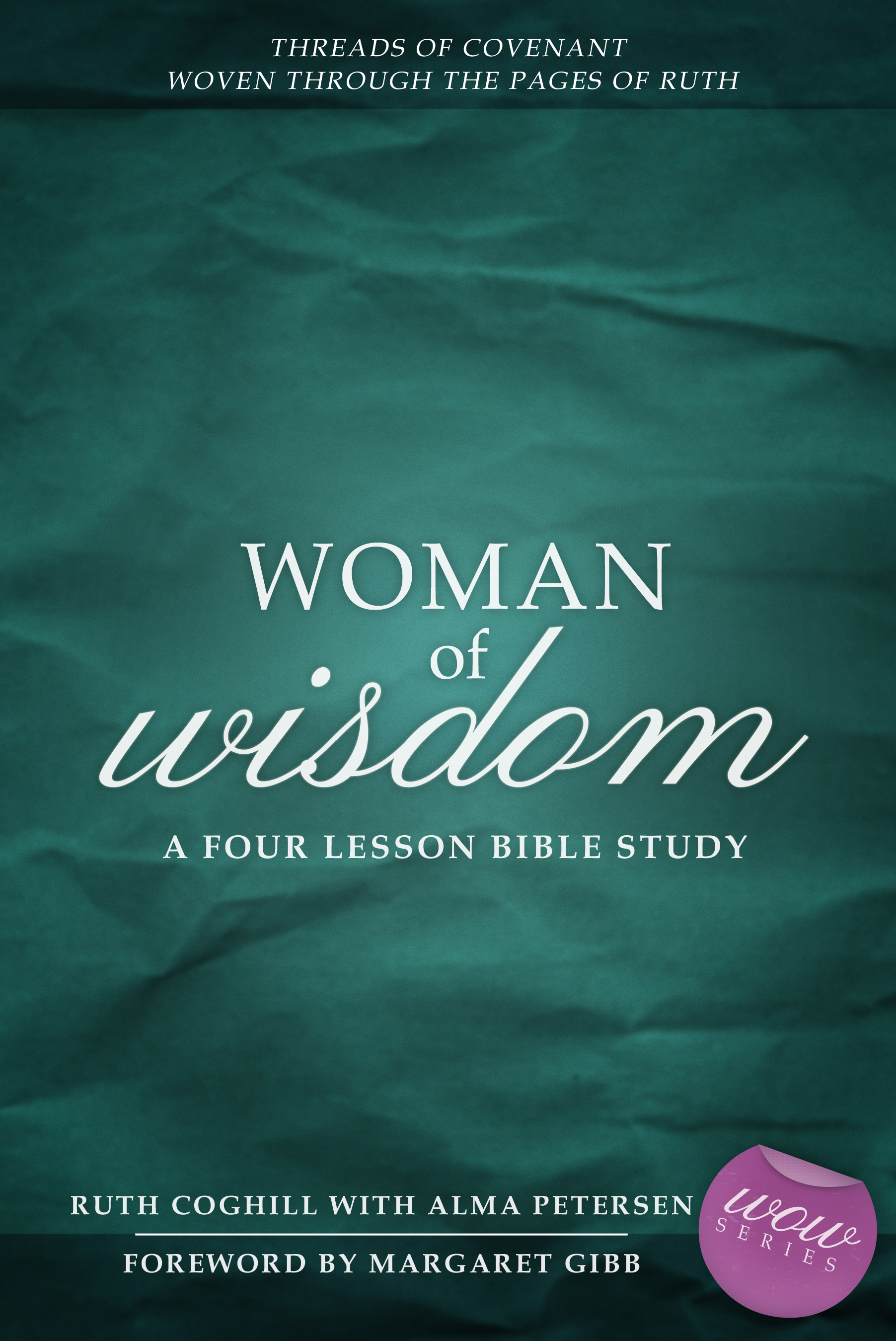 Woman of Wisdom—Covenant Truths Woven Through the Pages of Ruth

As I looked for a Biblical character of godly wisdom for this third book in the WOW series, Ruth became the role model. Alma and I had taught Precept Covenant for many years and discovered it to be one of the most powerful topics we had studied. We co-authored this third study, weaving into the text practical and insightful truths. Little did we know when we began just how many covenant truths were packed into the eighty-five verses of Ruth. 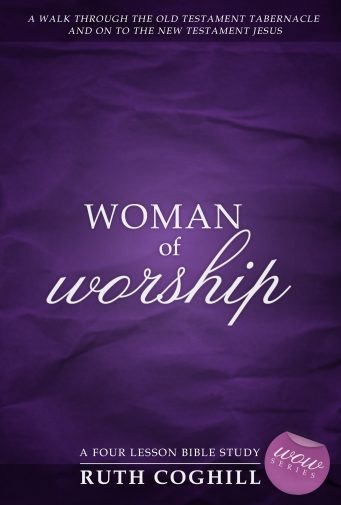 The writing of the final study in the WOW series is currently on hold as I took time out to collect stories and publish Unborn. Untold. True Stories of Abortion and God’s Healing Grace

"The Book of Ruth gives us a full view of two women who have lost everything and the sacrifice that each are willing to make for the other.  Naomi, the elder who is willing to send her daughter-in-law Ruth back home to her family in Moab, and Ruth who is not only unwilling to leave her mother-in-law but who enters into covenant with Naomi and with Naomi’s God.  (Ruth 1:16-17).  From this point God weaves His tapestry that determines their future, provision, family, and life eternal.

This study with its focus on covenant and the depth of a covenant relationship in its absolute and binding nature changed my understanding and embrace of what it means to be in a one-on-one personal covenant relationship with God.  Despite our personal circumstances which can manifest in ways we never imagined (the pandemic being a prime example), we can have peace and blessed assurance that God has and will walk before us unfolding his plan for our provision, protection and our future.

What was different in this study for me was that firstly it is the story about a woman in a destitute situation. Ruth was a Moabite widowed woman without child nor the protection and provision of a living immediate male relative (brother-in-law).  She would not have been valued as a member of society.  But once Ruth made the decision to enter into covenant with Naomi and Naomi’s God everything changed.  Ruth was loved by God, He provided for Ruth and Naomi meeting not only their immediate needs but ensuring their future.  A future that included a lineage to the birth of Jesus.   Secondly, I can see myself in Ruth’s story.  How often am I concerned with the daily woes and challenges in my life and later glimpse back to see God’s hand in those situations.

So, what did I learn?  To stay close, to trust His wisdom, His promises and remember “to be still and know that I am God” Ps 46:10.

I would encourage you to take your own journey to discover the richness of a personal covenant relationship with the Father."  Cathy Boone

• I was born on a small island, Grand Manan, tucked in the Bay of Fundy—18 miles long and 11 miles wide.
• I’m the fourth daughter born to Bernard and Clara Tatton.
• I swallowed a straight pin when I was four years old and lived to tell about it.
• Black licorice is a vice of mine.
• I like to skate, ski, line dance, and travel.
• My first teaching experience took place during the influx of Italian immigrants in the mid-sixties. My first grade class of thirty-seven children welcomed seven new Italians, some of whom could not as yet speak English.
• Bob and I always wanted four children, but we wanted them all in one decade. God’s plan spread those four children over seventeen years.
• Our family times bring me much joy!
• I’m 5’2” (at least at one point in my life) and I really like high heels and lots of shoes.
• I’ve traveled to Haiti, China, The Philippines, Thailand, India, Ukraine, Nepal, Uganda, Kenya, and Angola to share my love for God and His Word.
• Memorizing scripture is a regular discipline.
• The WOW series study guides have been translated into Mandarin, Nepali, and Spanish. Efforts are underway to translate them into Portuguese.

The Backstory to Unborn Untold: True stories of Abortion and God's Healing Grace.