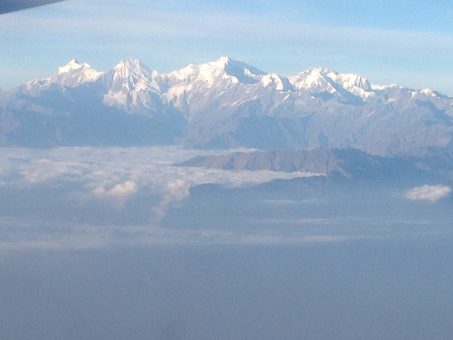 A dramatic country with some of the most beautiful mountaintops in the world, Nepal boasts Mt. Everest in the eastern part of the Himalayas.

Early in 2017, under the direction of WomenTogether’s International Outreach Coordinator, Pat Klein, Ellen Krahn, Shusma Adhikari, our Nepalese translator and me, prepared and planned an event  to encourage Shusma in her leadership development in her nation of Nepal. 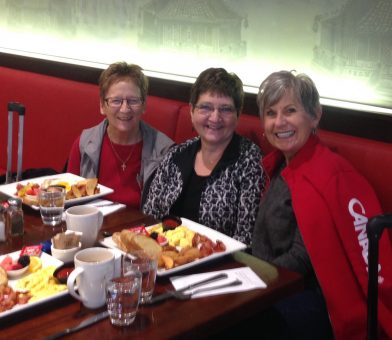 On November 17, 2017 Ellen, *Pauline Streeter and I travelled from Toronto to Hong Kong and on to Katmandu, the capitol of Nepal.

*Pauline and her husband Dave Streeter, founded Aanandit Aid to Nepal Charity in 2015, to help the Nepalese victims of the earthquake. Dave and Pauline arrived in Katmandu the day before the earthquake in 2015 and were stranded there a few days before being rescued by a Canadian military flight. They know firsthand the challenges the Nepalese faced after such a natural disaster. Pauline was a perfect completion to the travelling trio.

Here we are enjoying breakfast at Toronto Pearson airport before boarding our flight and our hearts are bursting with excitement as we anticipate what God has for us in Nepal. 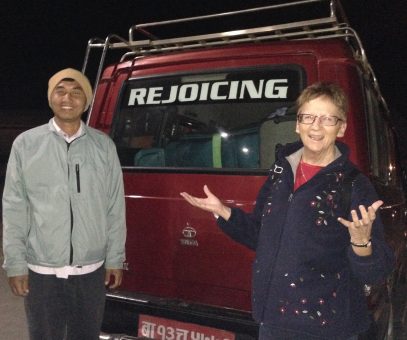 We arrived in the capitol of Nepal, Katmandu, late Saturday night and were greeted inside the airport by Bal, smiling and  holding up a paper with our names printed: Ruth Coghill, Ellen Krahn and Pauline Streeter. We were all rejoicing when we finally picked him out of the crowd. The rejoicing van provided our transportation in and around Katmandu and our driver, Bal, and his wife are the house parents at the Aanandit Charity Orphanage. 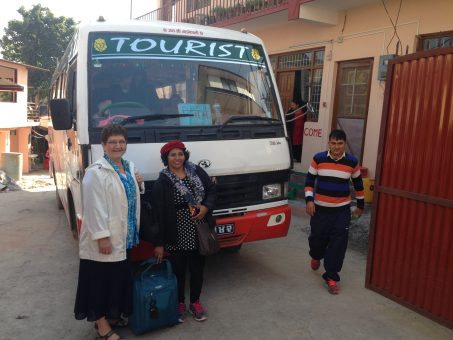 Transportation can be challenging in this mountainous country, one mountain range runs right into another. After a long drive up into the mountains in this tourist bus,  with face masks to protect us from the dust and pollution,  we arrived in Nagarkot a couple hours from Katmandu. Many of the twenty-one ladies who travelled with us from Katmandu had never been away from home or stayed in a hotel. And it was here we had our first overnight retreat.

This overnight event played a significant role in the lives of these women. 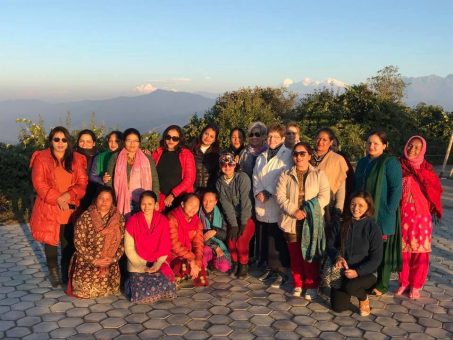 On top of the mountain, both figuratively and realistically…This picture was taken at 6:30 am after watching the sunrise. Its brilliant rays lit up the snowcaps of the Himalayans. Incredible view in every direction!

New friendships were formed while we chatted, heard each others stories, ate together, laughed, cried and prayed together. We even slept a few hours!

Nepal is a relatively new country to Christianity. Sixty years ago there was just a handful of believers and today there are over 1.3 million. The religion is Hindu and Buddhism. 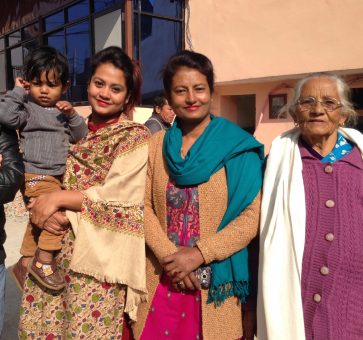 The impact that Christ has had on this nation is remarkable. Many of the converts discover the healing power that comes from God, the Only True Healer. After years and much money spent on witch doctors, someone invites the sick person to church or God speaks directly to the hurting and whispers His love telling them where to go to find help. This picture shows four generations of Christian heritage. Razeena, on the left  with her young son is the third generation of Christians in her family. She is a leader of Aanandit Church, helps in the sewing room and also helps with youth ministries. Razeena attended the Nagarkot retreat and found great inspiration and empowerment from our teaching on Psalm 139. 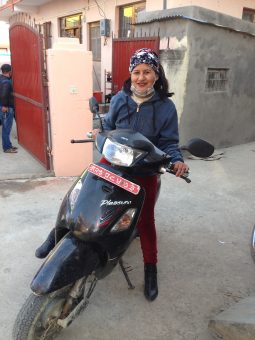 Sarmilia, another delightful attendee to Nargokot, shown here on her scooter. In bondage to evil spirits since a child, Sarmilia came to her point of hopelessness and wanted her life to end.  She often left her young son to get treatment but nothing worked until she cried out in desperation,’If you are there kill me or get me out of here’. God in His wonderful mercy reached down and spoke to Sarmilia and directed her  to go to a church where she would find help. A Christian for just a year and the only believer in her family, she is married to a Buddhist who threatened to divorce her if she went away overnight with our Women Together retreat.  Sarmiia passionately told us her story and received great  breakthrough as our team prayed for her. 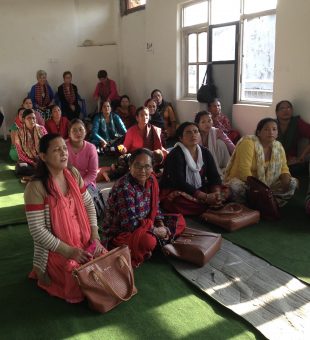 Our  second Women Together event happened in Hetauda. These  village women, sitting on the floor as is the custom, listened intently and then responded to God’s Word in Psalm 139. To know that they are valuable in God’s eyes and that He has their days ordained for them really resonated in their hearts. This is a message for all women but particularly in a patriarchal society.

Before we left Hetauda, Pastor Milan took us to the top of his church and on to the Prayer Tower. We were moved as we looked up to see a flag of Canada hanging with many other flags. Moved because we knew that these beautiful Nepalese believers were reaching beyond their border and praying fo others 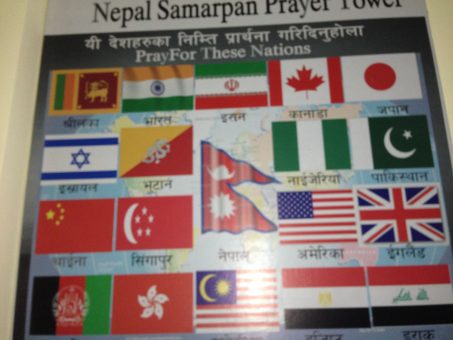 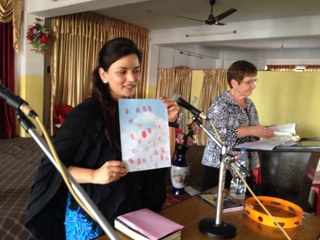 We travelled over very treacherous mountain roads  and arrived in Pokara, a modern tourist area. Shusma and  Ellen are teaching this group of professional teachers, nurses, pastors wives. What an honour to encourage each of these women in their God-given calling. 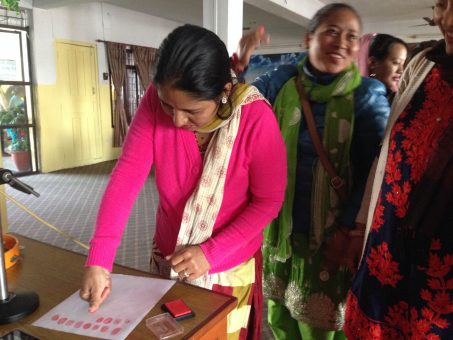 See the joy on their faces as they add their fingerprint to the many other ones on the page. Such marvellous God-creations we are!

And just before we boarded our flight to return home to Canada, I was thrilled to see Srijana again. I first met her in 2009 on my first visit to Nepal. She was part of the memorizing scripture workshops I presented with Shusma translating. Srijana was so motivated by God’s Word that she went on to memorize another eighteen psalms in the next two months. She shares a transformational story of the impact of God’s Word ‘hidden in her heart’. 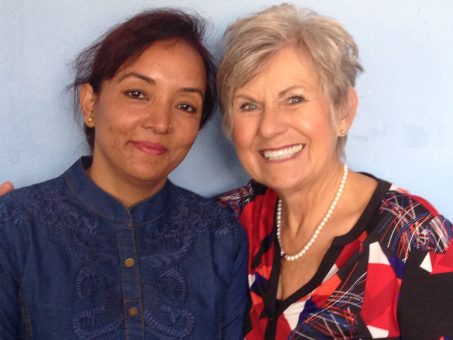 Well, there is so much more to share but I’ll wait for another post. In the meantime, keep watching, keep praying for more in the beautiful country, Nepal, whose people have truly touched my heart. I want to go back.